Trump was scheduled to speak Friday evening in Chicago, but pulled out of the event at the last minute as the scene descended into chaos.

Donald Trump called off a rally in Chicago Friday evening as massive protests led to flaring tensions and fights in the crowds.

The rally was scheduled to take place at the University of Illinois at Chicago Pavilion. However, in the hours leading up to Trump’s arrival, massive crowds gathered both inside and outside the arena. Journalists estimated that thousands of people were at the scene, and several fights could be seen unfolding on live television footage. 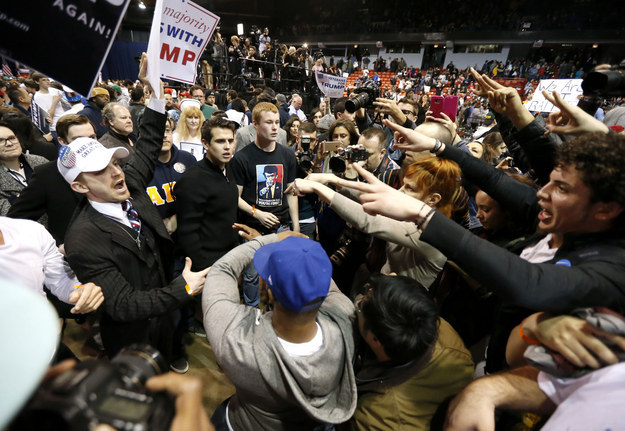 As tensions escalated, Trump announced in a statement that after meeting with law enforcement, he had decided to postpone the event “for the safety of all of the tens of thousands of people that have gathered in and around the arena.”

Chicago police said in a statement to BuzzFeed News that Trump notified them shortly before 6:30 p.m. that he was canceling the event. Chicago Police Interim Superintendent John Escalante said during a news conference that five people were arrested at the event and demonstrations.

Two officers were also injured, Escalante added, including one who was hit in the head with a bottle and who will need several stitches.

Many of the most intense moments of the evening happened immediately before and after the announcement that Trump would cancel the event. Video from the scene showed a crowd cheering when an official announced the cancellation.

Asked later on MSNBC about the decision to cancel the event, Trump said he thought it was the right move. 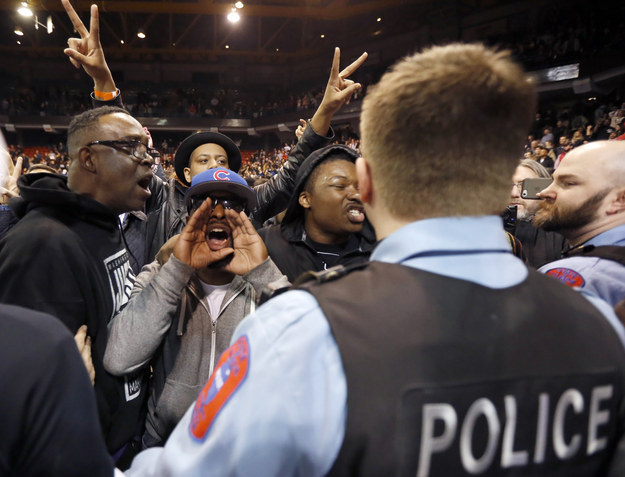 In a phone interview with Fox News, Trump later said, “We have a very divided nation. I’ve been saying it for a long time.”

“White, black, we have so many sets of divisions,” he continued, “and hopefully we’ll be able to bring it together. I’m a unifier.” 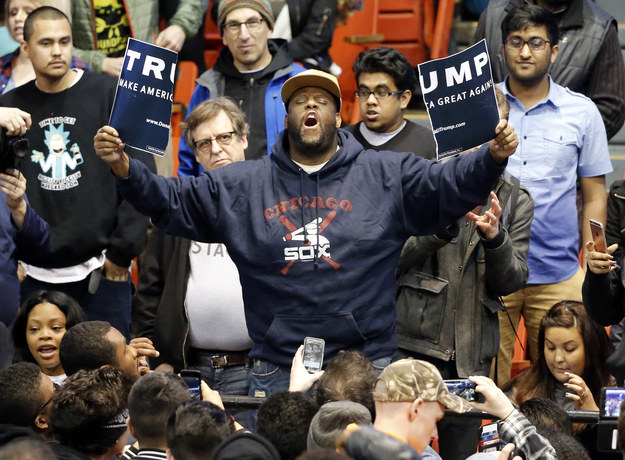 Trump also discussed the need for more job creation, crediting the anger displayed by protesters to a pervasive sense of frustration with the economy.

“You have to bring back jobs. I’d be angry too,” he told MSNBC’s Chris Matthews.

Also in the MSNBC interview, Trump railed against not being able to have a peaceful rally in a major city and speculated that the end result could be more support for his campaign. Chicago’s diverse ethnic makeup, he added, “shouldn’t matter.”

Trump also argued that some of the violence that has erupted at previous rallies was the fault of protesters, calling them “bad dudes.”

“There are two sides, and some of these protesters are really dangerous people,” Trump said. “You can’t even have a rally in a major city in this country anymore without violence or the potential of violence.” 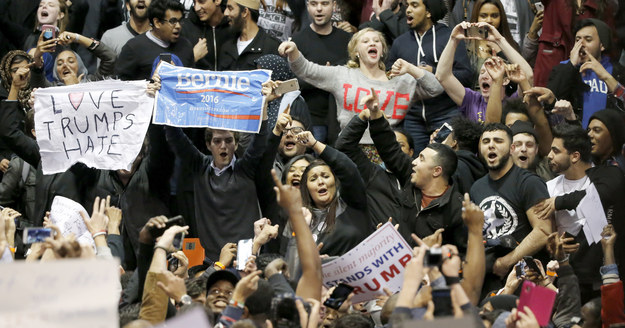 Anti-Trump protesters at the Chicago event held signs referencing the GOP frontrunner’s comments about race, Muslims, Latinos, and other issues. Others held signs that read “Dump Trump” and “Stop hate.”

One of the protesters, Jermaine Hodge, 37, told the Associated Press the U.S. would only be further divided by Trump.

Another protester, 20-year-old Kamran Siddiqui, told the AP that the protesters wanted to shut the rally down “because this is a great city and we don’t want to let that person in here.”

Many Trump supporters at the event, meanwhile, held campaign signs and clashed with protesters as authorities worked to clear the venue.

Even after Trump canceled his appearance Friday night, the demonstrations continued outside the arena.

Democratic frontrunner Hillary Clinton tweeted a statement about the chaos, saying “the divisive rhetoric we are seeing should be of grave concern to us all.” She also condemned violence.

“All of us, no matter what party we belong to or what views we hold, should not only say loudly and clearly that violence has no place in our politics, we should use our words and deeds to bring Americans together,” Clinton continued.

She then mentioned the South Carolina church shooting that left nine people dead in June, and called on people to emulate the victims’ families, who “came together and melted hearts in the statehouse.”

Speaking to reporters in Illinois, Ted Cruz said Trump’s campaign bears some responsibility for “creating an environment where the candidate encourages” violence.

He added that he hoped for a “respectful, substantive, issues-based discussion,” and decried Friday’s chaos.

“That’s not how our politics should occur,” he said.

But Trump spokeswoman Katrina Pierson told Fox News that the Republican frontrunner had only said things “just off the cuff” and was “not responsible for other people’s actions.”

Earlier Friday, police and protesters clashed at a Trump rally in St. Louis. The protesters repeatedly interrupted the candidate and were removed by police. According to the St. Louis Post-Dispatch, 32 people were arrested.

The violence and Friday’s cancellation come amid criticism of Trump’s rallies. During a GOP debate Thursday, Trump was questioned about inciting violence at his campaign events.