The island of Hull has been branded a “food desert” for its lack of a supermarket, and even smaller grocery store owners working in its absence say the community could use one.

The downtown community right across the Ottawa River from Ottawa’s parliamentary district has a few shops and depanneurs that sell food, but no full-size grocery store. 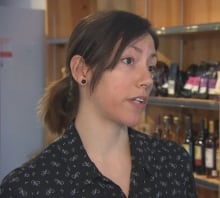 Anne-Marie Dufour, who manages the new Marché de solidarité régionale de l’Outaouais co-op grocery store on Eddy Street in Hull, says a supermarket would be good for the community. (Radio-Canada)

The manager of Marché de solidarité régionale de l’Outaouais — a co-op allowing people to order local food online, that just expanded to a new walk-in shopping space on Eddy Street — said they’ll still have their niche if and when a supermarket opens nearby.

“I really hope there will be more and more opportunities for businesses to grow up here and bring the fresh food [to] the community … definitely it will be us but also different types of enterprises because really there’s a need and there’s a demand for it as well,” said Anne-Marie Dufour.

A little further down the street, the new co-owner of the Marché Monette grocery shop said a supermarket could change the way people think about Hull.

“A lot of people go to other places to do their shopping, pretty much everybody, and we have to try to get them to come here,” said Charles Seguin.

“You don’t have the same nutrition when you have to buy food at the depanneur or something… healthwise it’s absolutely vital for a community to have access to fresh food,” Dufour said.

“It’s creating a community as well where you can walk … it’s more sustainable when you can walk to everything.”

According to the community group Coopérative de solidarité de l’épicerie de l’Île-de-Hull, which has been trying to get a large grocery store since 2005, the last Hull supermarket closed in 1999.

There have been several false starts through the years including in January, when plans for a 12,000-square-foot store in the new W/E condominium project at Eddy and Wellington streets fell through.

People pushing for a new supermarket are focusing on two potential sites: another condominium building under construction across the street from W/E or the SAQ depot on Des Allumetieres Boulevard, since its lease expires soon. 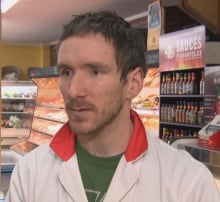 Charles Seguin has run Marché Monette on Eddy Street in Hull with his mother for five weeks. The small grocery store dates back to 1921. (Radio-Canada)

Seguin said he’d prefer if a new supermarket opened in about five years, when more people are living in these and other new condominiums in the neighbourhood to buoy all kinds of businesses.

“People attract people, if we can get more businesses obviously here we need more people,” he said.

“When new people come into condos, more businesses are going to come and eventually I think we’ll have a great area here with small shops.”