Yves Lacelle is literally picking up the pieces from the worst ice fishing season he’s seen in more than 40 years.

Not only did warm weather hurt ice quality and keep people from shopping at his Hawkesbury, Ont., bait shop, but when the Ottawa River ice buckled under the strain of fast-moving currents beneath the surface, it also broke many of his wharves and huts. 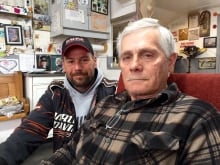 “It’s not fun when something like this happens,” Lacelle said Friday.

“We worked a lot to build all these things and put lots of time and lots of money in, [then] everything broke.”

A little further east in L’Orignal, Ont., Alain Fournier said his business, which takes people onto the river and rents them equipment, was also affected.

He said his ice was good enough to fish on, but people weren’t in the mood because the weather didn’t seem right.

“I didn’t have the customers I usually have. Usually I have 48 to 52 cabins on the ice. This year I have only 14,” Fournier said Friday.

“It makes a big, big difference in the budget.”

Fournier said he is usually out preparing his site between Christmas and New Year’s Day. This season, he couldn’t get out onto his Ottawa River bay until mid-January — and never got out onto the river itself.

When he eventually ended the season two weeks ago, the ice was still thick enough to be safe, but the melt had created 15 to 20 centimetres of water on top.

Fournier said he lost about $7,000 this season.

“I did about a third of the money I would have made in a nice winter … that’s it,” he said.

In Ottawa, the Oziles Marina broke even on its ice fishing rentals this winter, despite similar challenges that led to weekend rentals being half what they usually are.

“This was a winter of extremes,” said owner Yves Grandmaitre, adding that the season four to five years ago was even worse because of rain covering the ice and keeping customers away.

Grandmaitre said he’s hopeful the warm weather will lead to an early boating season and start a summer full of recovery.

Lacelle was in a similar mindset, saying he’s going to rebuild his damaged equipment himself to cut down on what would be a $200,000 repair bill if someone else did it.