A new plan by Starbucks to end food waste at its U.S. locations by donating all unused food to the needy won’t be coming to Canada just yet, but similar initiatives already exist on a local level — and the move by Starbucks may be part of a broader trend in the restaurant industry.

The coffee behemoth has dubbed its U.S. program FoodShare, and says it will use refrigerated vans to pick up unsold food from its 7,600 U.S. company-operated stores and distribute it through food banks. Starbucks claims the initiative will deliver almost 50 million meals by 2021 and help divert food waste from landfills.

No national program for Canada yet

Starbucks says it’s “looking into” formalizing a national Canadian program to eliminate food waste through food donations, but a spokeswoman said a timeline for such a program isn’t available. Still, some of Starbucks’ roughly 1,300 Canadian locations already donate food to local food banks.

In Toronto, distribution of food donations from local Starbucks — and many other restaurants — are co-ordinated by Second Harvest, a “food rescue” program that works to prevent waste and feed the hungry by recycling surplus food from restaurants, retailers and manufacturers.

That local partnership began in 1996, says Second Harvest’s director of programs Lori Nikkel, and distributes the same kind of perishable food — sandwiches, cheese, yogurt and the like — that would be recycled under the new Starbucks plan in the U.S. All of the donated items are distributed on the same day they’re made, says Nikkel, so there’s no risk of expired food entering the supply chain.

“We’re delighted, we’re very excited about it,” says Nikkel. “We hope that they would roll out a similar national program in Canada.” 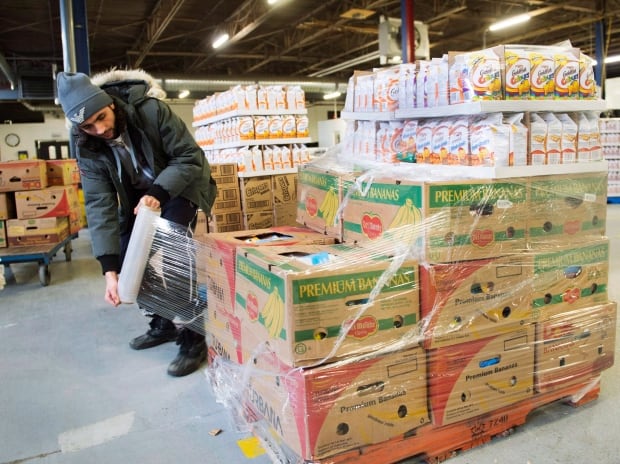 Many food banks supply the needy with unsold food from local restaurants and hotels, in addition to donations from manufacturers and individuals. (Ryan Remiorz/Canadian Press)

“I think it shows a tremendous amount of responsibility on the part of the organization,” says Brenner.

“We’re hoping it will come here. We’re still very, very happy with the existing relationship we have with the Starbucks in the city and in the province, so this would just be an even better and more efficient way of doing it.”

Second Harvest’s Nikkel is impressed with the specifics of the Starbucks plan, which would relieve logistical pressure on food banks by freeing them from picking up unused food themselves.

“The way they’re managing it is so clever,” says Nikkel. “It’s not a quick fix, they have a five-year strategy to implement.… I love that they’ve thought it through this well.”

“If I think about a city the size of Toronto … it would be virtually impossible to do a daily pickup from every Starbucks in the city,” says Nygard.

The Starbucks plan is part of a recent trend toward eliminating waste within the restaurant and hospitality industries, according to Sylvain Charlebois, a professor at the University of Guelph’s Food Institute.

“It’s really about capitalizing on efficiencies and making sure that the food is repurposed in a way that it actually helps the people in need,” says Charlebois.

“There’s been this awakening around food waste for maybe four or five years,” says Charlebois, as the result of some major academic studies. An increasing number of restaurant chains are concerned about food waste for a variety of reasons, including corporate social responsibility initiatives, managing costs and public relations.

“They know it’s there, they know it’s a problem, but they’re not necessarily overly comfortable talking about it. So when you see a company like Starbucks moving forward on a strategy like this, it’s not surprising. They’re just showing that they’re trying to do something about food waste.”

Even though the stated goal of Starbucks program is to eventually “rescue 100 per cent of its food available for donation,” Charlebois points out that the plan doesn’t address the core Starbucks product — coffee.

“When you look at waste, they often say that the No. 1 consumer of coffee in the world is the kitchen sink.”