Trump denied ever criticizing soldiers who get captured in war, despite doing just that in July.

At an eventful town hall held by Donald Trump in Cincinnati, Ohio, on Sunday, one attendee asked the GOP frontrunner about comments he made stating that Senator John McCain was “not a war hero … because he was captured.”

“I came here because you made a comment to John McCain that you don’t think captured soldiers are heroes,” the man, who was introduced as the father of a soldier who was captured and killed in Iraq, said into a microphone.

At first, Trump attempted to interrupt his question, denying he had ever made the comments. “Oh, no, no, no, I never did that,” he said.

“What I want you to do is just clarify that for me,” the man continued as Trump acquiesced, “because I think it’s important for all … the veterans in Ohio [to hear your answer], because I know what you were doing–”

Trump, who had walked over to the man while he was asking the question, interrupted him again.

Trump listens to a question from the father of a POW.

In July, days after an aggressive back-and-forth between the real estate developer and the senator, Trump denounced McCain at an Iowa summit.

“He’s not a war hero,” said Trump. “He was a war hero because he was captured. I like people who weren’t captured.”

As a Navy pilot during the Vietnam war, McCain spent around five-and-a-half years in a brutal North Vietnamese prison, where he was repeatedly tortured, causing permanent damage to his mobility. Two of those years were spent in solitary confinement. 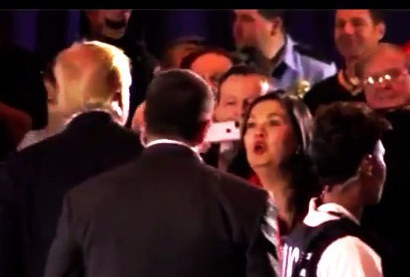 Later at the same town hall, a woman who said she was from Nicaragua stood up in the crowd and began showering Trump with praise.

“I want to thank you for what you are doing in our country,” the woman said. “You are giving our country the opportunity to dream and hope, [and prove] that we are a Christian nation.”

After speaking about how popular he is with Hispanics, Trump walked over to the woman and hugged her. She grabbed the mic from him and said, “I love your blue eyes.”

In what was supposed to be the last question, a woman who introduced herself as Native American asked Trump if, as president, he would apologize on behalf of America about the atrocities done to Native Americans throughout the history of our country.

“I’m not big on apologizing sweetheart, but I’ll look into it,” Trump said, before turning to a white man for a last question that he described as a “fun question,” and not a “bum question.”