Canadian Armed Forces soldiers are dismantling nearly half the tents at the border camp in Saint-Bernard-de-Lacolle.

Soldiers are taking down 35 of the total 75 tents set up to temporarily house asylum seekers crossing into Canada from the U.S.

In total, 13,211 people have been intercepted by the RCMP in between official points of entry since the start of the year.

Approximately 5,550 asylum seekers crossed through Quebec in August alone but numbers have dropped dramatically during the month of September.

The tents had been empty for two weeks, as the flood of migrants arriving on Roxham Road dried up. 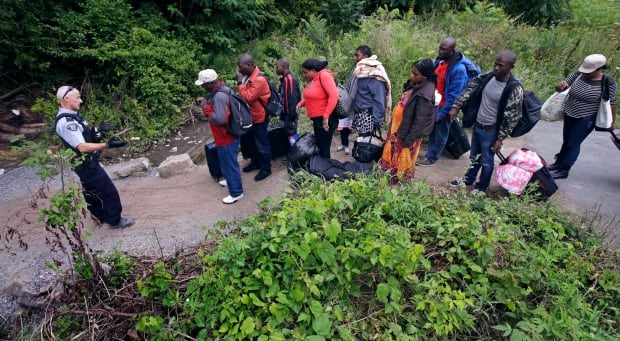 Lately, the CBSA sees between 40 and 80 asylum seekers a day come through Roxham Road, a few kilometres from Saint-Bernard-de-Lacolle.

The order to take down the 35 tents came on Friday, Sept. 22 and the work is set to be completed by the end of this week.

Border services still intends to keep the remaining 40 tents (which can accommodate more than 500 people) until November.

The tents were set up by the CAF in August to deal with the influx and were filled to the maximum at the height of the migratory crisis on  August 15, with nearly 1,200 people waiting to be processed last month.

Many of the recent refugee claimants crossing into Quebec are Haitians who have been living in America for years but now face deportation.

In May, U.S. President Donald Trump announced that he would not be extending temporary protection status (TPS) for Haitian nationals past January, when that status is set to expire.

TPS was granted after the 2010 earthquake, but now the Department of Homeland Security considers Haiti to be a safe country.

Man arrested in connection with Highway 20 ...