The City of Montreal and the West Island suburb of Sainte-Anne-de-Bellevue have announced the expansion of L’Anse-à-l’Orme nature park.

That decision effectively puts an end to a years-long battle between conservationists and real estate developers over undeveloped land at the west end of the existing park, along the Rivière l’Orme.

“Absolutely thrilled,” said David Fletcher, vice-president of the Green Coalition. “It’s a major step in getting the job done.”

The stretch of land in question straddles the borough of Pierrefonds-Roxboro and Sainte-Anne-de-Bellevue, in the West Island.

The mayors of Montreal and Sainte-Anne-de-Bellevue, Valérie Plante and Paola Hawa, held a joint news conference Thursday to announce Montreal would acquire the parcel — a little more than 14 hectares of forest, or about the equivalent of 22 CFL football fields.

“There are very few green spaces in Montreal,” Plante said. “We have to be able to have ways to preserve green spaces.” 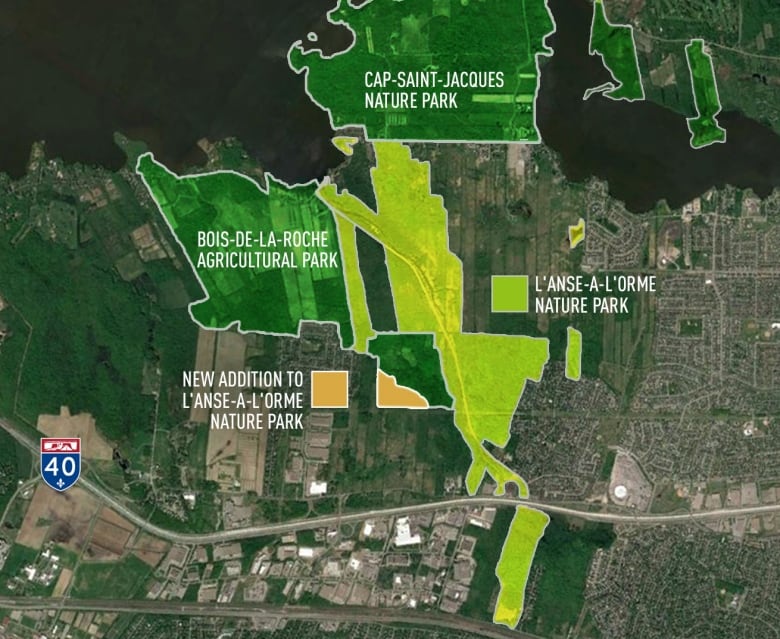 The newly acquired land that will become part of the park is indicated in yellow.

The purchase price is a little under $11 million, and the entire cost will be assumed by the agglomeration of Montreal. That means all 31 municipalities on the island will be chipping in.

A private developer purchased the land for about $9 million in 2011, with the intention of creating a new housing development.

The developer was one of three that jointly launched a $35-million lawsuit against Sainte-Anne-de-Bellevue last year, claiming the town council’s change of heart about the use of some 93 hectares of land in the northern part of the town was threatening their development plans.

The purchase effectively puts an end to the lawsuit for the piece of land the City of Montreal is acquiring.

Part of a bigger vision

Plante said today that Montreal was the first city in Quebec to adopt a formal policy to protect the natural environment.

Protecting these 14 hectares of land from real estate developers is just the start of a more ambitious project, she said.

Ultimately, she said, the goal is to acquire more wooded land to create an urban national park that would be accessible on foot from the new LRT station planned for Sainte-Anne-de-Bellevue.

“Too often people who are not well off find themselves trapped in the city in the heat of the summer,” said Hawa. “With a train ride, 20 minutes away, they get the chance to walk through a forest.” 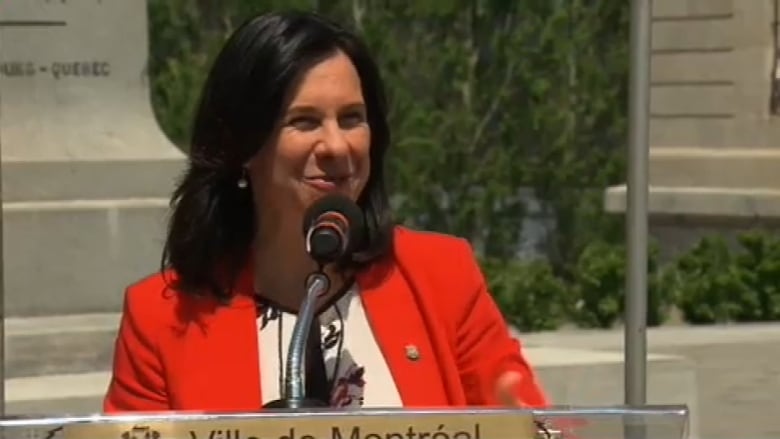 This project means re-evaluating planned residential developments in Pierrefonds-Roxboro, as well. Plante says plans are underway to sit down with everyone with a stake in those developments.

Montreal’s mayor said it’s the responsibility of political leaders to save green spaces like this one.

“This is one of the last remaining green areas we have on the island,” Plante said. “It is precious. It is a treasure.”

Plante said Montreal will work closely with Sainte-Anne-de-Bellevue to develop green corridors and pedestrian pathways to improve access to the nature park.

That plan includes building a walking path to the expanded park from the planned LRT station in Sainte-Anne-de-Bellevue, Plante said.

At an executive committee meeting Wednesday, Plante said it was a matter of quality of life.

Hawa said Thursday the whole reason she got interested in politics 15 years ago was to fight for protecting the ecology of the West Island suburb.

She thanked the “dedicated visionaries” who worked over the past 30 years to preserve the land from the threat of real estate development.