Germans rank Calgary as best Canadian city to drive in, Vancouver the worst

Calgary is the best Canadian city to drive in, according to a global ranking system devised by a German auto parts retailer.

The rankings come from kfzteile24, which evaluated 100 major cities worldwide, including five in Canada.

Montreal ranked 13th followed by Toronto at 14th, while Ottawa came in at 22nd and Vancouver at 48th.

The rankings were based on nine criteria, which were weighted as follows:

Calgary scored especially well in the most heavily weighted category — ranking as the third-least congested city out of the 100 on the list.

Vancouver, by contrast, ranked 71st in terms of congestion. 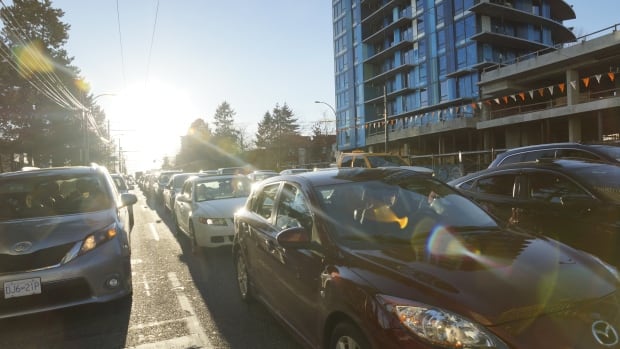 Traffic queues up along a Vancouver street. The B.C. city ranked 71st out of 100 cities in terms of congestion on a list devised by kfzteile24, an German automotive retailer. (David Horemans/CBC)

The German retailer chose which cities to include by first making a list of the 500 cities around the world with the most registered vehicles, then paring that down to 100 based on the cities that had the most available traffic data.

“At kfzteile24, we believe every city should be great to drive in,” the company said.

“We conducted a study to discover which are the best and worst cities for driving, with the aim of enriching the debate around modern mobility and encouraging cities to learn from each other’s positive urban engagements and legislation.”

The full rankings and more information on the methodology is available here.